Mentions of Lamborghinis On Reddit As A Predictor of Bitcoin Price 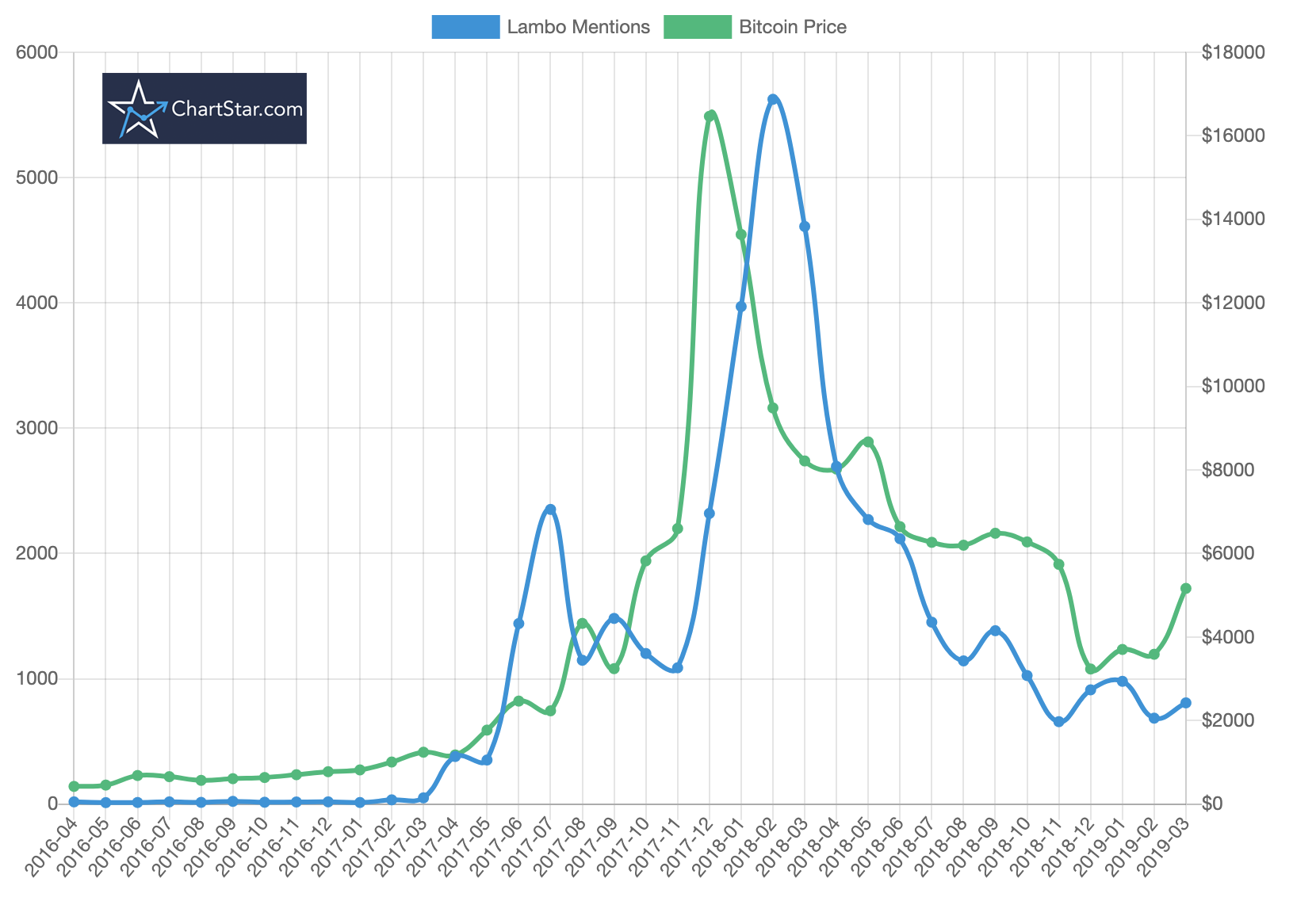 Could Lamborghini mention frequency really be a technical indicator of Bitcoin price performance?

In our last blog post article we examined the correlation between the frequency of Bitcoin mentions against the USD price of Bitcoin over time. The popular response to that article was amazing - thank you to everyone who liked, shared, upvoted and responded to our content! It's truly appreciated.

We actually received a lot of feedback and ideas for future analysis from readers of that post and immediately started poring over what was suggested:

At that moment I just knew I had to do this.

Read on and in this post I'll lead you through the most mind blowingly detailed technical analysis ever conducted on Lamborghini mentions correlated with the price of Bitcoin (which probably doesn't take much as this could well be a world first).

And most importantly we'll take a look at how Lamborghini mentions are faring compared to price so far in 2020.

ChartStar offers a free range of advanced cryptocurrency trading tools, orderbook heatmaps and backtesting for testing trends like this, so go ahead and sign up right now!

I'm skipping the detailed methodology in this post as it's almost an identical copy of this.

But for the uninitiated who want the TLDR: all the Reddit comments can be queried from the free Google BigQuery dataset. Note that's up until Q3 2019, for most recent comments we use the actually awesome PushShift.io free Reddit API.

Speaking of costs, it's worth remembering the "free" Google BigQuery service isn't free when you run a really big query, no pun intended. So for these examples it will push you over the free quota into being billed.

Down to business, Lamborghini Mentions During The last Bitcoin bullrun

Now lets plot the frequency of each Lamborghini mention per month against the dollar price of Bitcoin over the last legendary golden bull-run period:

Well who would have thought it, there's an actual noticeable correlation! Lamborghini techincal indicator confirmed. It's worth pointing out:

What I find interesting is whilst Lambo mentions clearly spike after the biggest price increase, there is also a very substantial surge in Lamborghini mentions early on the bullish phase.

And now for the big one... Bitcoin is on the verge of going super bullish right? Let's see what's going on with Lambo mentions in 2020.

Following the same methodology as above we can see:

Let's all pause for a brief second and admire the subtle beauty of that sharp upwards trend in Lambo mentions from the last week. Note that the time scale at the bottom is "year-week" and goes up until the 6th week of this year which is as far as I could take it.

Mention analysis of other sports cars

Just kidding with that headline.

If you enjoyed the work that went into this I would appreciate it if you subscribe to the blog or retweet on Twitter. Thanks!

p.s. I have only 91 Twitter followers at the time of writing so please show me some love!

Read our blog post to see what the 2020 Lamborghini trend says 👉https://t.co/ztvZ6iaOOe pic.twitter.com/N0HWHu2N76

What’s on this page